Scott Alexander is funny, likeable and his magic appeals to a wide range of people. His amazing magic reached millions on NBC's America's Got Talent where he advanced all the way with his large stage illusions.

With articles in People Magazine and Nations Business Magazine, the Oprah Show took notice and Scott was invited by Oprah Winfrey to make a guest appearance on her popular TV program

Read More
Scott Alexander Profile
Scott Alexander is funny, likeable and his magic appeals to a wide range of people. His amazing magic reached millions on NBC's America's Got Talent where he advanced all the way with his large stage illusions.

With articles in People Magazine and Nations Business Magazine, the Oprah Show took notice and Scott was invited by Oprah Winfrey to make a guest appearance on her popular TV program

Scott had the honor of headlining on the Las Vegas Strip at Caesars Palace for over seven years and four thousand performances of large grand illusions mixed with stand-up comedy magic.

Alexander's groundbreaking creativity caught the eye of Norwegian Cruise Lines and they commissioned Scott to create, direct the magic and star in "Elements," a million dollar stage spectacular. It is currently their most popular show and is in production on five ships.

Scott's magic has been featured on The Syfy Channel, Discovery Channel and NBC. Scott has appeared in Paris on the world class and prestigious Le Grand Plus Cabaret Du Monde. He has opened for comedian Dennis Miller and as a creator and innovator of magic, his ideas are utilized in performances by other magical luminaries, most notably Penn & Teller.

Whether it be the intimacy of a close-up sleight of hand performance, stand up comedy magic, or the all out spectacle of a large stage show, Scott Alexander's delivery is always lighthearted, somewhat irreverent, amazing, quick-witted and sure to leave you filled with wonder and laughter. 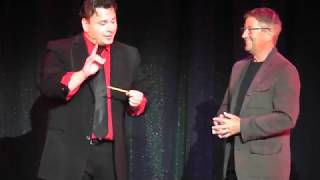 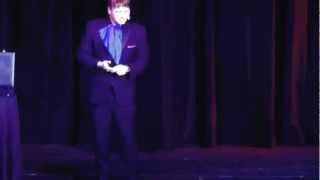 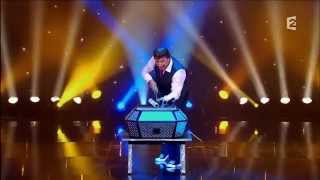 The Power Within
A magical program with Scott Alexander
What's your power? Did you know that by changing your point of view, you can change your reality? Do you know the goal setting strategies of some of the most powerful and successful people in the world? Did you know that stress and tension release with a good laugh? Scott Alexander can inform, empower and entertain you with his "The Power Within" presentation that features magic and illusion, comedy and motivational concepts that can shape and build your career, employees, business and even your life.

The Power of Perception

The Power of Perception
Scott Alexander explores the power of perception in this humorous and touching portion of his program. How often do we see a situation and imagine that there is no way to change it? But are things really as they appear, or is it just our point of view? Thru magic, Scott takes seemingly impossible situations and manifests a successful outcome just by looking at them from a different angle. Let him teach you how to change your point of view and watch the world change around you! Scott shows the audience a single strand of white cotton thread. The thread is broken into small pieces right in front of the audience. Do you see a ruined situation or pieces of an opportunity? It is all in how you look at it. By changing our perception of the situation, the broken pieces can become possibilities... the chance for a change. Instead of seeing the broken thread as a ruined opportunity, we can change our perception and thought process to accept them as a chance to move on in a new direction. We regroup with a new sense of power and may even discover something no one thought possible.

The Power of Goal Setting

The Power of Goal Setting
Through magic and comedy, Scott takes you on a journey through the ways that he obtained his career goals. He realized very early on that your job is what you do, it is not who you are. He realized that he wanted to sculpt his life around his work, not allow his work to dictate how he would live his life. There is a tremendous power in willing things to happen... demanding more for yourself that you'd ever dreamed. Scott's life is a perfect example. When he was 7 years old he saw a magic special live from Las Vegas. He vividly remembers the bright swirling neon lights and the name of Doug Henning in big bold letters on the marquis of Caesars Palace. He thought to himself, "My name will be up in lights on that sign!" Through his formative years studying the psychology and the art of magic he made this his ultimate goal. It was a completely unrealistic goal for a young person to even dare to dream but Scott knew that he wanted to shoot for more than he thought he could obtain. All thru high school and college, he never wavered from this inspiration. He sought out mentors, teachers and friends that would help him to achieve his goal. It was during this time, that Scott met his future wife, Jenny, who joined the show and brought with her a new and fresh perspective that would help them take their magic to the next level. Scott vowed from this time on that he would not be afraid of collaboration and not keep his ideas to himself but to join forces with people that he trusted to create a fantastic final product. Straight out of college, he sought out the contact information for an agent who booked in Las Vegas. He reached deep down inside, saw that final goal and picked up the phone. The meeting was a success and Scott found himself thrust into those bright lights of Las Vegas with a one month long trial contract. Now instead of watching those entertainers on television he was now their equal, competing with them in the job market. These were people he has looked up to all of his formative years and now he was their completion. Scott was like a fish out of water. His shows were not what he dreamed they'd be and he had to struggle to keep up with the competition. He felt that maybe he had aimed too high. It only took a moment to remember that promise to himself that he had made years ago, "My name will be up in lights on that sign!" He realized that this was his one shot and that he was there for a reason. He had to grab and pull himself up by his bootstraps and rise to the occasion. Even though he was in over his head he had to sink or swim, stay afloat, keep it together, loose fear and jump right in. He realized that the emotion of fear was the flip side of the emotion of excitement. By looking at fear as excitement this energized his tenacity and resolve to polish the act into a Vegas ready product. Over the next few weeks, with hard work and complete dedication, audience response swelled into standing ovations. This complete turnaround changed that first one month long contract into a seven year long engagement and a prominent place on the marquee of Caesars Palace on the Las Vegas Strip!

The Power of Laughter

The Power of Laughter
Sometimes nothing goes the way we'd planned or stress gets the best of us and all we can do is laugh. There is a tremendous power in laughter. It changes our physical and mental state. It relieves tension and conflict. There is no healthier attitude than to be able to laugh at yourself and the situations that surround you. Scott combines magic and humor, to teach his audiences about the power of a positive and lighthearted attitude. Sometimes people see work and business as a burden or a puzzle to solve; they look at it as a challenge. By adding humor, it frees your mind to just relax and when you are relaxed you can more readily accept the challenges. It's so easy in the business world when money is on the line to get wrapped up in the day to day grind of making and holding onto our physical wealth, at the expense of our spiritual wealth, that we forget to laugh and breath. Of course, it's serious work and important to our well being and that of our loved ones but nothing is so important that a good sense of humor can't be incorporated. Scott uses a $100 bill from an audience member to illustrate that sometimes we need to let go of our tension in regards to the "business" of business and let loose, blow off steam and laugh. Once we do, we can go back to our work refreshed and in a better mood, with a more positive outlook and with creative energies renewed.