Robert Strong – "The Comedy Magician" has been entertaining audiences since 1985. He has performed on national television, in all 50 states, in 47 different countries, and twice at the White House.

Read More
Robert Strong Profile
Robert Strong – "The Comedy Magician" has been entertaining audiences since 1985. He has performed on national television, in all 50 states, in 47 different countries, and twice at the White House.

He's a 10-year artist in residence at The Smithsonian, the resident magician at Google, and he's the host of Comedy Talks: Conversations with the Legends of Comedy. One of the highlights of his career was opening a number of times for comedy legend Robin Williams.

He spoke at TEDx San Francisco on "The Anatomy of Magic" in 2017.

He creates a custom routine for every audience. Contact us to have him make your events fun and memorable.

Robert will help you take your event to the next level. With more than thirty years of experience entertaining, producing, and consulting for corporate events, you will benefit from his attention to detail, his extensive network of event professionals, his insight and intuition that can only be learned from doing more than ten thousand shows, his incredible ability to adapt at a moment's notice, his keen sense of timing, and most importantly, his ability to work a crowd (not to mention to interface incredibly well with all the other event vendors before, during, and after your event). If you want a true professional in every sense of the word, a seasoned performer, someone who was born to entertain, someone who can see issues long before they occur, someone who is easy to work with, and someone who has been called the "nicest entertainer on the planet," you want to work with Robert Strong. 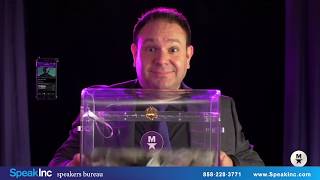 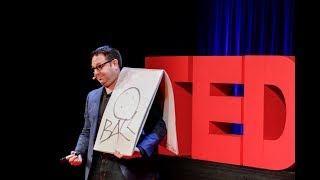 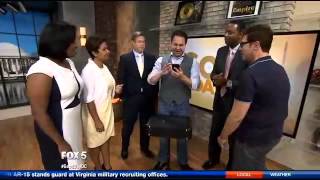 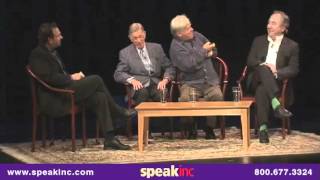 The Great Escape
Once Robert is shackled, he instructs the audience-volunteer to time his escape. A look of shock and surprise crosses the volunteer's face when he realizes his watch is missing. That's right, the sneaky magician stole his watch while locked in the shackles! Robert effortlessly gets in and out of the shackles without the volunteer having a clue. The laughter rolls and rolls through the audience until the volunteer catches Robert in his shenanigans.

The Magic of Teamwork

The Magic of Teamwork
Four volunteers from the audience are given nicknames, seated closely together, and hypnotized. All four chairs are removed. Amazingly, the volunteers do not fall to the floor. Each volunteer is supporting the person in front of him. It's the magic of teamwork! The audience laughs hysterically while the volunteers "problem-solve", trying to figure out how to get out of their predicament.

Illusions – Make your VIP appear magically
Or, disappear (if you insist…). Want to open or close your meeting with a BANG? Want to surprise your audience and make you CEO appear out of thin? Your keynote speaker is special and their entrance should be eye catching and memorable.

Robert Strong has illusions available to make their entrance spectacular. With only 30 minutes of rehearsal, your VIP can be the star of the show and appear magically on stage.

Other Titles
Fire and Chainsaw(available upon request)
The audience will be awestruck watching Robert flirt with death, danger, and destruction as he actually juggles three flaming torches and eats fire. Then, to tempt fate, Robert tosses around a running chainsaw like it was a harmless beach ball.

Magic with Bowling Balls
Robert makes three real bowling balls appear out of thin air right before your very eyes. If that's not enough, in a show of sheer strength, he juggles them effortlessly.

A Sharp Balance
Robert balances precariously on a board, tube, and two chairs while juggling an axe, a machete, and a sickle. The audience cheers for the death-defying juggler and the brave volunteer who has just pulled off a solo performance of the Village People's YMCA.

A Perfect Match
The CEOs of a merging company or a couple celebrating their anniversary are brought up on stage. Each person freely selects a card. To everyone's disappointment, they don't match. But wait! Robert has a large prediction card that has been hanging (camouflaged) in front of the audience during the whole show. The prediction matches perfectly. Angels sing, and the audience jumps to their feet in a standing ovation.

The Slice-O-Matic
Robert demonstrates his new "magical" kitchen appliance. It slices, dices, and chops fresh vegetables. It has one important safety feature. It will not chop hands (the hands of the volunteer that is). With the flick of the wrist and a snap of the fingers, the razor sharp blade passes right through the volunteer's hand and a carrot. The carrot is sliced in two while the volunteer's hand is safe and sound. The audience and volunteer take a big sigh of relief.

Mind-Reading
Robert asks the audience a series of questions. No matter what the answer is, he has a funny prediction that is always right on the money.

Strait Jacket
Robert is strapped into a regulation strait jacket. The laughs come a mile a minute while he bends, struggles, and contorts his body to escape.

Bizarre Tricks
For audiences with a stronger stomach, Robert hammers a 6-inch nail up his nose, gets his hand caught in a bear trap, and puts a skewer right through his tongue. The tricks aren't real, but the laughs certainly are.

Sound FX
Robert electronically changes the voices of his volunteers. He makes a kid sound like a monster, a woman sound like an opera singer, and a big burly man sound like a munchkin from the Wizard of Oz. The audience falls out of their seats laughing and wondering what's next.

Pick Pocketing
Everyone agrees that Robert is friendly and funny, but no one expects just how clever he really is. While he is "innocently" talking to the volunteers, he is secretly stealing their watches, wallets, keys, cell phones, and jewelry. Has he no shame? At the end of the act, the wiley pick pocket gives back all the loot to the utter shock and surprise of the volunteers. The audience howls with laughter at the hilarious reactions of the volunteers. And then, they quickly check their valuables. No one is safe…

And Many More!
Robert has many more tricks up his sleeve. All you have to do is ask to hear about them. Also, he can customize any of the above routines and he can write original material just for your event.