Dr. Lawrence Chimerine is President, Radnor International Consulting Inc., in Radnor, PA; and Partner and Member of the Investment Committee of Miller Investment Management (formerly Strategic Capital Advisors) in West Conshocken, PA. He is the former Chairman, Chief Executive, and Chief Economist of Chase Econometrics and The WEFA Group.

For more than 25 years as an economic consultant, Dr. Chimerine has lent his advice and council to an impressive resume of major Fortune 500 companies, financial institutions and government agencies, providing private consultation on the state of the U.S. and world economics, specific industries and sectors, and the impact of economic conditions on decision making, budgeting, and strategic planning. He serves on numerous corporate boards, is a member of various professional associations and has held teaching positions at three universities.

For more than 25 years as an economic consultant, Dr. Chimerine has lent his advice and council to an impressive resume of major Fortune 500 companies, financial institutions and government agencies, providing private consultation on the state of the U.S. and world economics, specific industries and sectors, and the impact of economic conditions on decision making, budgeting, and strategic planning. He serves on numerous corporate boards, is a member of various professional associations and has held teaching positions at three universities.

From 1965 to 1979, Dr. Chimerine was Manager of the U.S. Economic Research and Forecasting for the IBM Corporation. He left IBM to assume the chairmanship at Chase Econometrics, and in 1987, was appointed chairman and CEO of the WEFA Group. During the 1990's, in addition to founding and operating Radnor International Consulting, Dr. Chimerine was Managing Director and Chief Economist at the Economic Strategy Institute (ESI) in Washington, D.C.

Dr. Chimerine has earned a valued reputation as a leader in the economic arena. He has served on numerous governmental advisory boards, including the House of Representatives Task Force on International Competitiveness, the Census Advisory Committee, and the Economic Policy Board of the Department of Commerce. He is frequently called upon to testify on key economic issues before congressional committees, including the House and Senate Budget Committees, Joint Economic Committee, Senate Finance Committee, Senate Banking Committee, and the House Committee on Monetary Policy.

His latest books include, Business Opportunities and Practices in the Far East and the Handbook for Raising Capital, both published by Dow Jones-Irwin. He has published numerous articles in the New York Times, Washington Post, Business Week, World Policy Journal, American Economic Review, and The President, and is a frequent speaker at such organizations as the Detroit Economic Club, the Commonwealth Club of California, the World Affairs Council, the Wharton Symposium, the National Association of Business Economists, numerous trade association meetings, as well as to many corporate boards and other corporate groups. 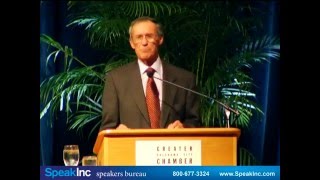 Key Business and Economic Trends and ...

Key Business and Economic Trends and Issues
Dr. Chimerine will discuss the current economic and business situation in the United States and in major foreign markets, and the short term and long term outlook for the U.S. and global economies. Dr. Chimerine will analyze the key factors that will impact economic and business performance in the years ahead, as well as the outlook for financial markets, and for important sectors and industries. Finally, he will discuss the implications of key economic trends for business planning and decision-making.

The New Business Realities
The business environment in the U.S. and abroad is changing more rapidly and more profoundly than ever before-no business can operate successfully without an understanding of these changes, and without adapting to them. Dr. Chimerine will discuss the origin of these new business realities, and others that are likely to develop in the years ahead, and the implications for key management priorities and strategies.

Competing Successfully in the New Eco...

Competing Successfully in the New Economy
The U.S. and global economics are currently more competitive than ever in economic history. The intensification of domestic competition in part resulting from the Internet and other new technologies, coupled with growing foreign competition, has changed the competitive balance and mix in virtually every industry. Dr. Chimerine will discuss the new strategies for success in this more competitive environment, including strategies for dealing with the increase in risk and uncertainty that it has created.

Technology, the Internet and the new ...

Technology, the Internet and the new Economy
The Internet and other new technologies have not only transformed the U.S. economy but are having profound effects on the way companies produce, market, and distribute their products and services. Dr. Chimerine will discuss how these technologies are affecting the U.S. economy, and how they are altering various economic relationships. He will also discuss how leading edge companies are using the Internet in all major business functions and activities, and the important applications for the future.

Other Titles
Business planning in the Global Economy

Business planning in the new Millennium