Dana Daniels, teamed with his "Psychic Parrot" Luigi (yes, a Psychic Parrot), have been motivating and entertaining at Corporate events around the country for companies such as McDonald's, Lincoln Financial and Frito-Lay. With Dana as the comedian, and Luigi as the straight bird, the duo never fail to fracture an audience with laughter.

Read More
Dana Daniels Profile
Dana Daniels, teamed with his "Psychic Parrot" Luigi (yes, a Psychic Parrot), have been motivating and entertaining at Corporate events around the country for companies such as McDonald's, Lincoln Financial and Frito-Lay. With Dana as the comedian, and Luigi as the straight bird, the duo never fail to fracture an audience with laughter.

Dana has also opened for such stars as Ray Romano, Amy Grant, Vince Gill, Tony Orlando, Randy Travis, Gary Shandling and Charro. "It's Dana's unique twist" on magic that separates him from other magicians, and separates Luigi from other poultry. 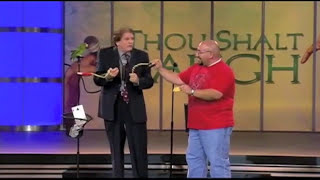 Strolling Close-up Magic
Nothing is better than having amazing magic performed right in the hands of your guest during the cocktail hour. Dana Daniels will ignite the evening with accomplished sleight of hand that will dazzle your attendees and start the evening off with a buzz in the air.

After Dinner Entertainment
Dana keeps the laughs going at a speedy clip using his trusty side kick Luigi the Psychic Parrot. Yes, you read correctly -- a psychic parrot! In-between Dana's outrageously funny sight gags, he sets out to prove that his little green friend is truly clairvoyant. Together, they perform such miracles as finding chosen cards, reading the mind of somebody on a cell phone and turning an audience member's $100 bill into bird food only to have it reappear inside an egg laid by Luigi. (Tough trick for a male bird) Dana takes command with a style and confidence that puts the audience at ease.

Crack-up-Sessions
Laughter is the highest motivating force. Turn one of your breakout sessions into a crack-up session. Your attendees will feel rejuvenated after witnessing Dana as the comedian, and Luigi, as the straight bird, the duo is perfect to deliver your keynote message while performing off-the-wall magic blended and rapid-fire clean comedy. It's an effective way to refocus your attendees for their remaining sessions.

Master of Ceremonies
Dana can keep your event moving at the right pace. His bright, quick wit and unique improvising skills are readily used while dealing with your unexpected situations. Once Dana brought a volunteer up on stage and quickly discovered he did not speak English. Most entertainers would probably exchange the person for someone else. Not Dana, he kept him up there and did an extra 10 minutes of hilarious material capitalizing on the situation. He is the "master" of working with, not at, his audience.

Keynote Speaker/ Keynote Parrot
As a professional speaker and an award-winning entertainer for over 25 years, Dana KNOWS HIS AUDIENCE. Armed with knowledge and research on your company, Dana seamlessly weaves your keynote message into an unforgettable event utilizing audience participation, roaring laughter and accomplished magic.