Conceived in Sydney, Australia in 1998, The Three Waiters™ is the brainchild of Opera Singer and Society Photographer Mark Bradley and well known Actor/Singer Darryl Lovegrove.

The Three Waiters™ quickly became one of the most successful singing waiters acts in the world, with over 8,000 shows in over 70 countries, it's now arguably the most popular act of any kind available for corporate events and fundraisers, private parties, and weddings!

The Three Waiters™ quickly became one of the most successful singing waiters acts in the world, with over 8,000 shows in over 70 countries, it's now arguably the most popular act of any kind available for corporate events and fundraisers, private parties, and weddings!

•The Three Waiters™ takes the concept of singing waiters to a new level, adding elements of sophistication, spontaneity, humour and audience interaction.

•It is not a slap stick or improvised waiters show. The act is completely sympathetic to the staff, caterers and guests and does not belittle or embarrass in any way; everything that happens in The Three Waiters™ could happen in real life, which is why the audience reacts with complete amazement to the comedy and vocal theatrics.

•The Three Waiters™ is made up of the best performers that opera and musical theatre has to offer. Each artist is chosen after an extensive audition process and not only must be vocally outstanding but must also possess a dynamic personality, with a flair for character acting, timing and comedy.

•The Three Waiters™ have won numerous awards, including being the only act to win Entertainer of the Year twice from Event Solutions Magazine.

•A repertoire consisting of arias made famous by The Three Tenors along with favorite standards and well-known songs from popular musical theatre, The Three Waiters™ has something for any musical taste.

•The Three Waiters™ singing waiters act works for any size or demographic. In fact, we have received standing ovations from royal families to suburban families including a standing ovation from The Three Tenors themselves in 2005!

•The team of performers in London cover the whole of the UK, Europe and Africa. We also have teams in New York, Sydney, Los Angeles, Melbourne, San Francisco, Las Vegas, Chicago, and Orlando who cover the other continents, so an unforgettable performance from this world class act is closer than you might think!

•Want everyone talking but the guests don't know each other? Book The Three Waiters™ – We're the best social event icebreaker! 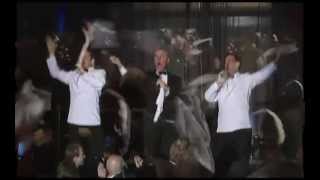 The Show
The original and still the very best Surprise Entertainment show available, "The Three Waiters" involves three singing waiters hiding in plain sight at your private function before unleashing a dynamic and sophisticated live performance a la The Three Tenors!

Here's what happens when you book The Three Waiters for your next function:

The event begins: our three professional performers, dressed and behaving exactly like the other staff, greet your guests on arrival – perhaps offering them a pre-dinner drink, finger food, a bread roll or directions to the cloak room. At no time do your guests realize these are Singing Waiters – this is the core of the Hoax: they look like waiters, they work as waiters, but they are The Three Waiters…

Jean-Marc (the Frenchman) is the charming and understated Wine Waiter; he is dressed exactly like the other staff.

Alfredo makes two short (40sec) announcements before the show begins: one officially welcoming your guests, then later, a second announcement, which ends when he sings a huge operatic note, prompting thunderous applause. He bows to the audience, but admits that it was not totally spontaneous: he was bet $50 to sing by one of your guests!

The show commences when Jean-Marc takes the stage and politely announces that another of your guests has offered him $100 to sing a full aria in Italian! The hilarious duel between French Opera and Italian Opera has begun. Jean-Marc's aria finishes to more huge applause, but Alfredo sends him back to work saying he "will show you how Opera should be sung… by an Italian!" Soon, with a little help from the audience, Jean-Marc and Alfredo agree to settle the debate and sing a song together – when suddenly, a third waiter bursts into the room singing brilliantly and upstaging both the Frenchman and the Italian!

The Three Waiters is a dynamic vocal trio featuring professional performers hoaxing as waiters, singing everything from Verdi to Elvis. It is only at the finale that their true identities are revealed, and then The Three Waiters are gone, leaving your guests cheering!