Kenny Polcari is a veteran equities trader, a CNBC exclusive contributor/market commentator appearing on Power Lunch with Sue Herera & Tyler Mathisen and Closing Bell with Maria Bartiromo & Bill Griffith, a speaker and champion of the NYSE.

He is known for boots-on-the-ground market analysis and home-style cooking. Every morning, Kenny writes a newsletter, which has been featured on Bloomberg and CNBC. It starts with insights on the day`s action and ends with a recipe to serve the mood of the markets. Kenny`s style is straight-shooting, conversational, and energetic.

He is known for boots-on-the-ground market analysis and home-style cooking. Every morning, Kenny writes a newsletter, which has been featured on Bloomberg and CNBC. It starts with insights on the day`s action and ends with a recipe to serve the mood of the markets. Kenny`s style is straight-shooting, conversational, and energetic.

You can find him doing interviews or guest spots daily, whether from the NYSE or in a studio. He works with the financial media to give market commentary for industry audiences. He also likes working with general media to help public audiences understand the markets.

Kenyy graduated from Boston University, School of Management in 1983 with a BS BA degree: concentration Finance. Then came to Wall St. as a summer intern on the New York Stock Exchange during the summers of `80, `81 & `82 and upon graduation moved from Boston, MA to NYC where he began his career on the trading floor. He speaks on topics such as the NYSE, the evolution of the equity market, and the role of technology and policy. He brings his speaking style to every speech -- energetic, humor-laden, and personal -- and customize every presentation to address the audience at hand.

Kenny became a member of the New York Stock Exchange in August 1985 and is currently the Director of NYSE Floor Operations on behalf of O`Neil Securities, Inc. He represents the interests of institutional asset managers that need to access global equity markets using the latest technology allowing him to give customers the personal attention and expertise of a boutique broker while remaining true to the non-conflicted agency model.

Earlier in his career, he served as Managing Director at Icap Corps, LLc, and prior to that was Senior Vice President, member New York Stock Exchange and division manager with Salomon Brothers directing their NYSE Division during the heady bull market of the 1990`s. 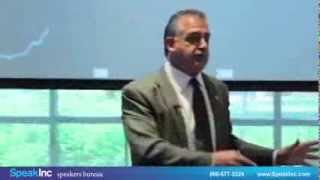 Equity Market Structure Today
How to Keep Pace with Technology
During the past decade, trading has become fast, simple, and cheap. And volume has exploded. But at the same time, the market has become fragmented, more volatile, and less liquid. In this talk, Kenny discusses what we`re learning about how regulation can keep pace with technology and why it can help the market better serve its purpose -- to give people the confidence to invest.

How The Market Works

How The Market Works
Inside the Action and Through the Maze
You`re invested in the stock market. But market structure has evolved dramatically the past decade. In this talk, Kenny brings you inside the action to show you how it all works today and how stock traders represent your money in a fragmented world. Trading is both simpler and more complex than ever before. It`s faster and cheaper, but also poses big questions for risk management. Kenny gives this talk to give investors a renewed sense of confidence, especially in the face of economic uncertainty.

~The Evolution of the Equity Market and US Market Structure

~Former & Current Market Structure:
Including internalization, HFT and fragmentation and how those changes have forever changed the face of the US capital markets and what that means to the investor.

~Investing, Creating & Having a Plan

~911 -- And The Day That Forever Changed Our World