7 Customer Service Lessons From the Best Uber Driver Ever

This Toronto Uber driver has maintained a 4.99 rating after driving nearly 5,000 passengers. When I climbed into his car, I found out why. 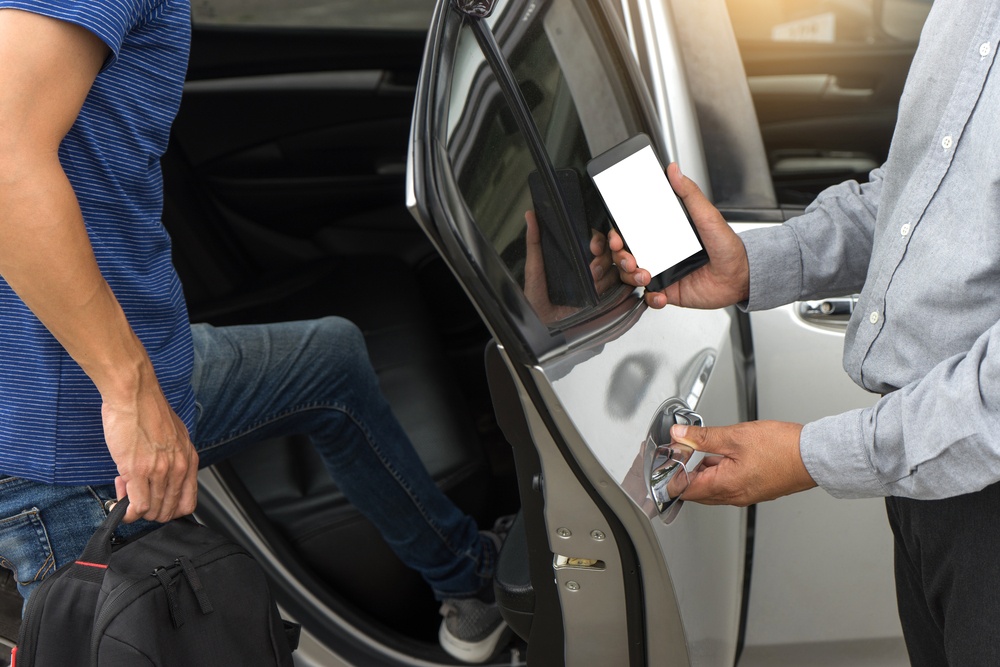 I’ve probably taken an Uber two or three times a day for the past couple years. And every time I idly check the driver’s rating and number of rides. I’ve found even pretty high marks usually mean good but not great service. 4.5? Get ready for loud GPS directions. 4.7? Messy trunk with no suitcase room. 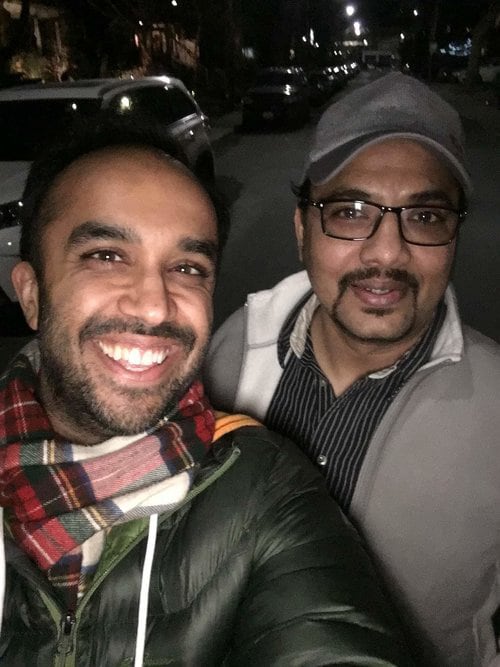 But something different happened recently. A few months ago I hailed an Uber driven by a guy named Vishwas Aggrawal, who goes by Vish for short. He had a staggering 4.99 rating. 4.99? I couldn’t believe it! I figured he was just a newbie–until I scrolled down and saw that he’d given almost 5,000 rides.

How was that possible?

Well, when I sat down in Vish’s car I realized how it was possible. The five-minute drive home blossomed into an interview I did with Vish the following week (in the back of his Uber, of course) for my podcast 3 Books with Neil Pasricha, where I discuss the three most formative books of inspiring people like Seth Godin, Judy Blume, and Gretchen Rubin. Vish was officially the first Uber driver on the show, and he shared with me why he cares so deeply about his service quality–even though Uber has no leaderboard, ranking, or major incentives tied to it–and what he does in order to keep that service so high.

1. MAKE A 10-SECOND OFFER, THEN CONFIRM THE DEAL

After Vish confirms his passenger’s name and destination, he always asks, “Do you have enough room back there?” while actually moving his seat up. Within 10 seconds he’s able to show–not tell–that he’s in the high-service game using a repeatable method to demonstrate this quickly.

After Vish moves his seat up, he says, “It will take 11 minutes to get to your destination. Does this sound good to you?” The purpose of the question is to establish the service being offered and find out if the passenger is in a rush. If they are, he’ll work hard to shave even a minute or two off the arrival time. If not, he knows the offering has been crystallized by both sides. The deal is confirmed.

2. YOU SET YOUR OWN STANDARDS EVERY DAY

Born and raised in Indore, a city in central India, Vish earned his MBA and held sales and marketing positions at Coca-Cola and New York Life, where he says, “I learned how to effectively deal with people” with tact and emotional intelligence. Eventually, Vish moved to Toronto and, like many immigrants, found it difficult to break into his adoptive country’s knowledge economy, despite his extensive corporate experience.

“Doing Uber was not my first choice,” he says, but he hasn’t lowered his work standards, even though the company doesn’t compensate him for it. “Why can’t you compare driving a car with flying an airplane? Like the pilot,” he points out. Both are fundamentally customer-service roles, requiring similar skill sets he developed earlier in his career. “One of my mantras,” Vish tells me, is, “Either I do the thing, or I don’t do the thing. But if I do the thing, I do it the best.”

Despite the thousands of rides he’s given, Vish knows that “it’s always their first time with me.” He keeps wet wipes under his seat and cleans the floor mats between every ride. Why? “This car is my office. This is the only office I have in this business, so I’m supposed to keep it up, I’m supposed to maintain it, I’m supposed to clean it,” he explains. “Every day, even when I go home, I also take out the carpets, I clean them. If it is snowing or dirty, I wash them.”

As an Uber driver, Vish says, “I know I’m doing a service,” not just operating a vehicle. His passengers’ experience is really what they’re paying for, more than just getting safely from point A to B. Vish has his phone programmed to silent, and an auto-responder menu pops up on his screen to handle incoming texts and calls, allowing him to tap and send replies without losing focus on his passenger. The one I kept getting while trying to set up our interview said simply, “I am in a trip, please text me if needed” (followed by the smiley face and thumbs-up emojis). 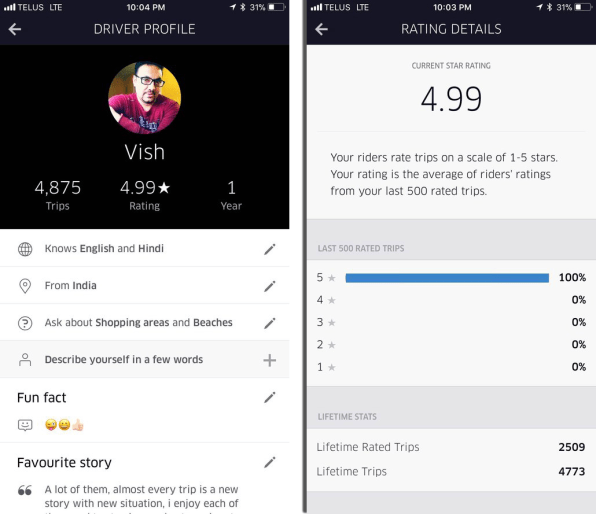 4. GIVE THE TASK TO THE “YES” PART OF YOUR BRAIN

Vish says that the classic self-help book The Magic of Thinking Big by David J. Schwartz gave him “a formula in life always–the formula of ‘yes man’ and ‘no man’.” As Vish explains, Schwartz argues that “the human brain is like a factory  with two foremen: one is a ‘no man’ and the other is a ‘yes man’ . . . If you give the job to the ‘no man,’ your own mind will start finding logic and reasons to prove how can’t you do this job.”

“You know debate competitions?” he asks me. The debater “who is speaking in favor looks quite right, and the person who’s speaking against also has valid logic, so at the time you feel both are correct.” In other words, we all have a choice as to which parts of our own brains we charge with executing certain tasks and tackling challenges. After reading Schwartz’s book, Vish says, “I started working on my ‘yes man.’ That’s what I do at Uber as well.”

Vish lets customers alter routes if they choose. He even calls passengers at home to tell them their UberPool-ing friend was dropped off safely, and tries to accommodate small requests along the way.

5. WE BUY WITH ALL SENSES

Vish only eats raw vegetables and salad in his car to avoid smells or odors. His car needs to be a blank slate that passengers can immediately feel ownership of, not like they’re suddenly in somebody else’s kitchen. He has the same theory about sounds, which is why his radio is never playing when a customer climbs in. If they want the radio on? That’s fine. But he turns it off for the next person. And if they’re eating a garlic stir-fry or smell like smoke? That’s fine, too. But he sprays a lemon air freshener and opens all the windows to start fresh the next time.

Vish says that Uber wants drivers to say “What is your name?” to customers before they get in the Uber. He ignores that. Instead, he greeted me with, “Is it Neil?” and a big smile. In fact, the excitement in his voice made it more of a statement than a question: “Is it Neil!” Real name, right off the bat, plus an immediate flash of intimacy.

“I try to break the ice by appreciating people,” Vish explains. “When you appreciate someone, you are not giving a discomfort to him or her.” Instead, he’s found that these simple moments of warmth he creates are almost always reciprocated. “They will surely come back with a positive remark or a positive affirmation, sentence, or a line or a word to you.” He adds, “If you start with a smile, 99% of people will smile back.”

7. KNOW YOUR CUSTOMER SPECTRUM (AND WHO FALLS OUTSIDE OF IT)

I asked Vish how he deals with drunk customers on busy Friday and Saturday nights. He surprised me by saying he doesn’t serve them. Drunk customers aren’t his target market. As soon as he lands one, he heads home. It’s a signal he’s serving folks outside of his customer spectrum and his day is done. (In fact, Vish also benches himself whenever he’s having an off day because he says driving is too risky–a judgment call that takes real self-awareness, especially in the gig economy, where there’s no direct boss to manage your performance.)

“The most important thing in your life is to enjoy what you’re doing,” Vish adds, and for him, it’s as simple as that. Driving an Uber wasn’t his first choice, and it isn’t what he intends to do indefinitely, but he’s doing more than just making the most of it.

He’s enjoying what he’s doing–and creating an unbelievably positive experience for everyone he interacts with in the process.

Can we all say the same?