Launched in Australia in 2003, Song Division was founded by musician and businessman Andy Sharpe, who pioneered the concept of interactive song writing, and has since expanded the platform to serve organizations through new and innovative methods.

Launched in Australia in 2003, Song Division was founded by musician and businessman Andy Sharpe, who pioneered the concept of interactive song writing, and has since expanded the platform to serve organizations through new and innovative methods.

Today, Song Division is a worldwide operation, offering a range of unique and engaging services across the Americas, Europe, the Middle East and Asia Pacific. Its clients include global brands and multinational companies such as Coca-Cola, Microsoft, PwC, Roche, Virgin and the British Government, as well as industry groups such as Meeting Planners International (MPI) and non-profits such as the Salvation Army and the Cerebral Palsy Alliance.

With a core management team composed of both renowned musicians and accomplished corporate executives, Song Division is unique in its ability to secure top musical talent while also connecting with an organization's specific audience in a way that best meets the client's needs.

Its roster of musicians has performed on some of the largest stages in the world alongside artists such as David Bowie and Sheryl Crow. All Song Division musicians undergo rigorous training in the Song Division method prior to leading a team.

Song Division participants need not have any previous musical experience; and no one is required to sing solo, unless of course they want to! Song Division offers a range of service options, which include:

• "Battle of the Bands" (Team Building) – Teams write original songs and compete against one another in a "Battle of the Bands" showdown.
• "Rock The General Session!" (Conference Energizer) – The band and room work in unison to write and perform an original song.
• "Rocking Reception" (Gala Dinners, Awards Nights & Fundraisers) – The band and group interact in a fun and low-pressure manner to write an original song in as little as 10 minutes.
• "Game Show" (Team building, Gala Dinners, Awards Nights & Fundraisers) – Teams put their rock knowledge to the test in this Name that Tune competition including musical challenges.
• Experiential Marketing – Businesses and their target audiences create an original song that highlights key themes and messages as part of a dynamic and interactive marketing campaign.

As an added feature on all service options, Song Division's musicians can double as the band at the evening's gala event.

Song Division sessions are both entertaining and practical, teaching critical problem solving and communication skills, and enhancing performance in any organization. Music is a powerful device that creates emotional connections to specific people, events and moments. By writing songs about event objectives, participants form closer emotional connections to the organization, brand, and, of course, each other.

With an international client roster, Song Division caters to groups from many countries and cultures. Its clients have successfully written lyrics in languages such as English, Spanish, French, Italian, German, Turkish, Arabic and Japanese, among others.

At the heart of the Song Division method is a singular drive to share the thrills and benefits of songwriting, using the best professional musicians and the company's pioneering and constantly evolving process. 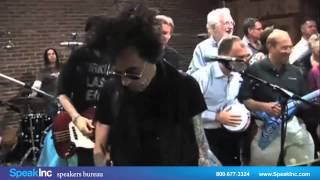 Battle of the Bands

Battle of the Bands
(Team Building)
Song Division's original "Battle of the Bands" program involves splitting the room into smaller groups. Each team is assigned a band member, who guides his team through the process of writing an original song – both lyrics and music. Songs focus on key event themes and messages. Afterwards, the teams are brought together for a "Battle of the Bands" concert, where a winning song is selected and then performed by the entire group.

Rock The General Session!
(Conference Energizers & Icebreakers)
A shorter program, the Conference Energizer is ideal for general sessions, generating energy and excitement among any size gathering. With the Conference Energizer, the band and room work in unison to write a completely original song. Afterwards, the entire room joins in the singing, as volunteers are offered the opportunity to come to the stage to play an instrument or sing with the band.

Rocking Reception
(Gala Dinners, Awards Nights & Fundraisers)
The Rocking Reception is a popular choice among event organizers with a tight program looking for unique and interactive entertainment. In a fun and low-pressure manner, the Song Division writes a completely original song with the help of guests in as little as 10 minutes, capturing the spirit of the evening. For an awards program, the Song Division band will play the honorees on and off the stage in the style of the Grammy Awards or The Late Show, adding excitement to a special occasion that only a top band can bring. The band will then fill the dance floor with hits from the last four decades.

Game Show
(Team Building, Gala Dinners, Awards Nights & Fundraisers)
A fun and interactive activity, Rock Trivia puts a group's rock knowledge to the test as participants vie for prizes and coveted bragging rights. With each table working as a team, participants go head-to-head in a full-band Name that Tune competition. A few "performance challenges" give individual participants a chance to show off hidden talents.

Experiential Marketing
Using a process similar to the conference energizer, Song Division works with a business and its target audience to create a completely original song that serves as the dynamic centerpiece for a marketing campaign. Song Division guides a brand's audience through the song-writing process, incorporating specific marketing messages to effectively build the brand.