Jon Picoult helps companies impress their customers and inspire their employees, creating raving fans that drive business growth. He is the Founder of Watermark Consulting and is a noted authority on customer experience.

A sought-after business advisor and speaker, Jon's insights have been featured in dozens of media outlets, including The Wall Street Journal, The New York Times, NBC News and Inc. He has worked with some of the world's foremost brands, collectively representing over 750,000 employees and $500 billion in annual revenue. Jon helps organizations capitalize on the power of loyalty – both in the marketplace and in the workplace.

Read More
Jon Picoult Profile
Jon Picoult helps companies impress their customers and inspire their employees, creating raving fans that drive business growth. He is the Founder of Watermark Consulting and is a noted authority on customer experience.

A sought-after business advisor and speaker, Jon's insights have been featured in dozens of media outlets, including The Wall Street Journal, The New York Times, NBC News and Inc. He has worked with some of the world's foremost brands, collectively representing over 750,000 employees and $500 billion in annual revenue. Jon helps organizations capitalize on the power of loyalty – both in the marketplace and in the workplace.

Jon's philosophy is simple: With every interaction, businesses win or lose share. Each touch point – be it with customers, distributors, or even employees – presents an opportunity to either build brand loyalty or erode it. He helps companies capitalize on this concept by creating end-to-end brand experiences that don't just satisfy, but impress.

Prior to establishing Watermark, Jon held senior executive roles at Fortune 100 companies – leading service, operations, distribution, technology, sales and marketing. Early in his career, Jon earned the distinction of becoming the youngest executive officer in the over 150-year history of a leading, global financial services company.

Jon received his B.A. in Cognitive Science from Princeton University and his M.B.A. in General Management from Duke University.

Here are three key things you should know about Jon:

First, he's walked in your audience's shoes. Jon has addressed audiences around the world – but he's not a career consultant or academic. Most of his professional life was spent as a senior executive at Fortune 100 companies, leading service, operations, technology, sales and marketing. So, when Jon shares his strategies for cultivating customer and employee loyalty, he's not just speaking from a textbook…he's speaking from experience.

Second, he's a thought leader. Jon's insights have been featured by leading media outlets and he has advised some of the world's most admired companies. He is the author of one of the most widely-cited studies on the ROI of great customer experiences.

Third, he goes beyond platitudes. The most important day of your event is the day after it ends. Will people apply what they learned, or get distracted by the whirlwind of day-to-day business? Jon won't leave your audience with platitudes – he'll captivate them with engaging examples, entertaining business stories and actionable advice that they can truly put to use back in the office. 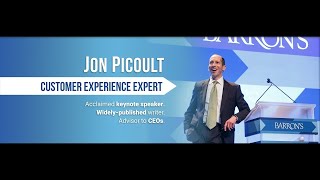 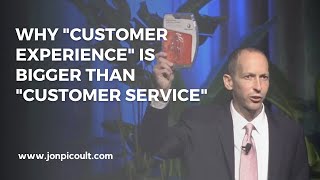 The Art and Science of a Great Custom...

The Art and Science of a Great Customer Experience
This is Jon's flagship program for organizations that seek to strengthen their customer experience ("CX") with cultural, behavioral and operational change. In it, he addresses a fundamental question for any business: How do you stand out from the crowd?

Many sources of competitive differentiation can be fleeting – product innovations can be mimicked, technology advances can be copied, and cost leadership is difficult to achieve let alone sustain.

But as Jon describes in this captivating session, a great customer experience (and the workplace environment supporting it) can deliver tremendous strategic and economic value to a business, in a way that's difficult for competitors to replicate.

Filled with compelling insights and fascinating case studies, this program reveals the time-tested techniques used by legendary companies to turn their customers into raving fans. Attendees will come away with specific, actionable ideas for enhancing their customer experience (whether they serve external or internal customers).

From Great Recession to Great Cessati...

From Great Recession to Great Cessation:
How To Strengthen Customer Loyalty During Difficult Times
In 2008-09, during the height of the Great Recession – a time when the U.S. economy was in a meltdown and every auto manufacturer was seeing their sales plummet – Hyundai Motors increased its market share by a remarkable 40%.

Starbucks, a company that lost over half its market value during that same economic downturn, emerged from the recession stronger than ever, delivering shareholder returns that were six times greater than that of the S&P 500 index.

These are just two examples of companies that skillfully leveraged Customer Experience principles to not just survive a period of crisis, but to thrive in the aftermath. It's a strategy that has even greater relevance today, as entire economies hit the "pause" button in response to the COVID-19 pandemic.

In this fascinating program, available in both live and virtual formats, Jon reveals how smart companies strengthen customer loyalty even during the most challenging times. It's an insightful talk, filled with actionable ideas that will help your organization weather an economic downturn and emerge stronger on the other side.

An "A" For Effortless

An "A" For Effortless
Lots of companies fly the "easy to do business with" banner. Few ever actually fulfill that promise, as most consumers can attest. In this fascinating talk, Jon Picoult will challenge your audience to raise the bar – showing them how to make it not just easy for customers to do business… but effortless.

Using eye-opening statistics and amusing real-world examples, Jon explains why an effortless customer experience is such a rare and powerful competitive differentiator.

The Cognitive Science Behind A Great ...

The Cognitive Science Behind A Great Customer Experience
The key to delivering a great customer experience? It's all in your head!

Legendary companies like Amazon, Costco, Disney and Southwest all leverage cognitive science to influence how their customers perceive and remember their experiences.

In this program, Jon describes how companies can capitalize on cognitive science to create a stronger, more memorable customer experience. From improving sales close rates to building positive word-of-mouth to enhancing employee engagement – you'll find the principles outlined in this program to be invaluable.

Other Titles:
Grow Your Business "On Purpose"
Many businesses focus on what they do, but fewer focus on why they do it. In this presentation, Jon opens people's eyes to the powerful concept of a purpose-driven brand – that is, an organization whose "reason for being" goes well beyond the traditional measures of success (e.g., creating shareholder value or growing revenues).

The purpose-driven approach has worked exceptionally well for companies spanning a variety of industries – Patagonia, USAA, and Southwest Airlines among them.

This program includes mini case studies of those organizations and others which have established a compelling brand purpose that engages customers and employees alike.

The Forgotten Customer: A New Perspective On Winning The War For Talent
Many businesses are routinely ignoring one of their most important customers. As a result, they're not only tarnishing their brand, but they're also losing the war for talent. Learn how you can turn administrative recruiting touchpoints into persuasive marketing opportunities that draw talented people into your organization.

Lessons From The Apocoflix: Navigating People Through Change
In 2011, Netflix announced a price increase and a spin-off of its DVD rental business. Customers revolted, leaving in droves. The company's stock price fell by over 75%. In this fun and interactive program, Jon uses the Netflix debacle to illustrate key principles for successfully navigating customers and employees through significant change.