Sell Smarter in the Modern Marketplace
Today's buyer fields an average of three hundred digital messages every single day. In just seconds, recipients decide whether to answer or ignore your outreach online.

With digital communication now a requisite to earning those critical in-person interactions, how can you attract attention, increase influence, and sell smarter in the modern marketplace?

Welcome to the art of Digital Persuasion. Erin Gargan's sales messaging formula has been leveraged by some of the world's biggest brands to open more opportunities, ignite profitable relationships, and inspire action from behind the screen.

Erin started her first venture, Jump Digital Media, at the age of 25 and cut her teeth building websites for brands like Whole Foods, Black and Decker, and Linksys. Her second venture, PMS.com, was a Dollar Shave Club-type subscription model for women's monthly healthcare supplies. Her experience running these digital enterprises has made her a highly sought-after keynote speaker for thousands of people from all industries on stages around the world.

When off-duty, the former world champion Irish step dancer and NCAA Division I athlete can be found in Laguna Beach, CA - biking, hiking, surfing, snowboarding, boating - basically anything outdoors will do for this ball of fire - with her husband Hartman. As a dual citizen of the United States and Ireland, Erin is very close to her east coast, massive, crazy Irish Catholic family.

Her life mantra is "attitude of gratitude," and right now, her only five-year plan is that someday she will be home long enough for Hartman to finally allow them to get a dog, which will be a King Charles Cavalier named Louise. 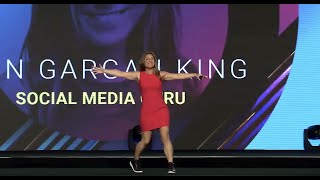 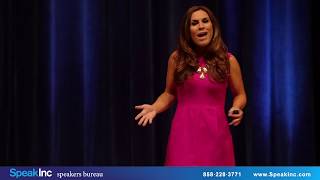 Digital Persuasion: Ignite Your Influence
Perfectly Tailored for: Executives, Directors, Managers, HR Recruiters, B2B Sales, Sales Managers, Entrepreneurs, Social Marketers, Direct Sellers, MLMs
This keynote is about:
•Communication: how to be more impactful and persuasive in today"s digital age
•Influence: how to lead and manage others, attract attention and sell smarter in our screen-centric communications
•Persuasion: how to differentiate yourself with language that triggers emotion and trust

When you type, text or tweet a message to an employee or customer - how persuasive are you?

When reaching out online to someone you don"t know - does your message influence others to give you a chance? Or ignore you?

Compelling communication in today"s digital marketplace is dependent on your ability to positively influence others to respond - without the power of face to face communication.

In person, you have 8 seconds before someone decides how they feel about you and the message you are delivering. Online, you have just 2.5 seconds - or the length of a mobile notification preview. Presenting a new idea, introducing a new initiative, or downloading a new direction begins with persuading your recipient - in just a few words - that what you have to say matters.

Erin shares the big mistake 90% of us make in our digital communications with our teams and customers. Her proven 3 step PUB method, used by clients ranging from The Academy Awards to the United States Navy, shows you exactly how to optimize your approach to elicit the responses and actions you"re looking for from your very next message.

Digital Persuasion - Sell Smarter in the Modern Marketplace (B2B)
Best Audience: B2B Sales Teams, B2B Sales Meetings, Entrepreneurs, Direct Sellers
When you type, text or tweet, how persuasive are you? When you reach out to someone you don't know online- what can you say to persuade them to give you a chance? Your ability to positively influence others -without the power of face to face communicaton- is THE business skill to master to work smarter in today's modern marketplace. Forget firm handshakes and eye contact- first impressions in the 21st century are dependent on your digital persuasion prowess. Are you able to earn a new opportunity- using just your keyboard?

In person, you have 8 seconds before someone decides how they feel about you using your nonverbal persuasion skills: your appearance, your eye contact, your smile. Online, you have just 2.5 seconds- and none of those personally persuasive elements.

How can you win over that potential customer, client or partner and inspire them to take your desired action? It starts with persuading your recipient that your message is worth stopping the scroll of that mobile phone-in just a few words.

Erin helps her audiences understand the psychology behind why some people's digital messaging wins face time with new prospects-while most others don't. She shares her formula for how to effectively and appropriately elicit a response, spark a dialogue and break through the "empathy blockers" AKA screens to elicit greater emotion from potential buyers.

Digital Persuasion - Amplify Your Event Using Social Media
Best Audience: Event Professionals, Trade Show Organizers, Professional Speakers
As a professional speaker or event planner- is social media your best friend or your worst enemy? Are you using it to drive attendance, attract attention and amplify your message? Or maybe you've tried a few tactics here and there, didn't see results, got frustrated and gave up. Social media can be the most powerful tool for putting a digital microphone and a spotlight around you, your message and your event. When harnessed appropriately, social media can activate friends telling friends, digital endorsements and drum up buzz and excitement like no other channel. They key to success is knowing how to use social media before, during and ESPECIALLY AFTER your events to drive leads, conversions, sign-ups, awareness, attendance and business from your most targeted prospects.

Erin shares her pre, during, and post-event checklist for social media success based on her experience running social media communications for hundreds of industry events over the last decade. She'll showcase real client stories, results and best practices that you can take and implement into your own social marketing efforts. You'll understand why some social media efforts pay off, while others are a waste of time. Using Erin's formula, you'll leave empowered and equipped to attract attention, increase influence and win more opportunities-using the power of social media.

Digital Persuasion - Sell Smarter in the Modern Marketplace
Best Audience: Direct Sellers, Corporate Marketers, Entrepreneurs
What inspires us to take action? What do the most digitally persuasive posts, messages, and emails have in common? How can direct sellers and marketers persuade today's social, mobile and digitally overwhelmed consumer to stop the scroll and engage or better yet, share?

Social and digital platforms can be the modern marketer's best friend or worst time-wasting enemy. Using her experience having sold two companies before the age of 30, and having quarterbacked hundreds of social media campaigns for VISA, The Oscars, ABC/Disney, Target, Hitachi, Siemens and others- Erin shares her very simple secret for communicating in a more persuasive way every single time you type, text or tweet.

You'll quickly and easily understand how to combat our tendency to deploy generic digital messaging. You'll understand what is scientifically happening with social posts that get ignored versus the ones that ignite action and gain momentum. You'll see your stories, emails, texts, videos and all other digital communication get a much needed persuasive punch- so you can positively influence others to get on board with your mission.

Translating what makes us so persuasive face to face to work more effectively in the digital environment starts with examining our daily customer communications through a new lens. Increase your digital persuasion prowess, and you'll quickly increase the tangible success of your digital sales and marketing efforts.

Sell Smarter in the Modern Marketplace Today's buyer fields an average of three hundred digital messages every single day. In just seconds, recipients decide whether to answer or ignore your outreach online. With digital communication now ...

With digital communication now a requisite to earning those critical in-person interactions, how can you attract attention, increase influence, and sell smarter in the modern marketplace?

Welcome to the art of Digital Persuasion. Erin Gargan's sales messaging formula has been leveraged by some of the world's biggest brands to open more opportunities, ignite profitable relationships, and inspire action from behind the screen.