On How to Help You Wake up, Stand up and Snap Out of It!
Short, thought provoking and humorous essays to help awaken you from the deep trance of the herd mentality.

What you've always wanted to say but didn't ...

Read More
Wisdom Wedgies and Life's Little Zingers:
On How to Help You Wake up, Stand up and Snap Out of It!
Short, thought provoking and humorous essays to help awaken you from the deep trance of the herd mentality.

What you've always wanted to say but didn't have the guts.

DeDe says it for you, so sit back, have a laugh and step outside your comfort zone!

DeDe Murcer Moffett is a high-energy leadership speaker who was honored by being voted as one of the best speakers making and impact today on "Meetings & Conventions" magazine's 2014 "Planners Favorite Keynote Speakers List alongside power speakers like Bill Clinton, Malcolm Gladwell, Barbara Cochran, Larry Winget and Sally Hogshead.

She is an enthusiastic larger-than-life personality who grabs the hearts and minds of audiences through powerful content and high-energy Broadway-style entertainment.

She is an enthusiastic larger-than-life personality who grabs the hearts and minds of audiences through powerful content and high-energy Broadway-style entertainment.

"My mission is to ignite a fire in you so you step up to the plate and do what you think you can't! Trust me, it's the best high in the world with only positive side effects!" -- DeDe

DeDe spent 25 years in corporate sales and sales management all while juggling a 24-year alcohol addiction. But after finally snapping out of it and doing something different she has accomplished amazing things. Today she shares the knowledge, emotional fuel and daily steps you must take if you want to discover your best work, ignite massive creativity, do the unlikely and keep going when life gets tough.

She is the author of the Amazon bestselling book, "Wisdom Wedgies and Life's Little Zingers," which is a collection of humorous thought -- provoking quotes about challenging fear and doing what you think you cannot do.

She is a featured entrepreneur in the book, "A Cup of Cappuccino for the Entrepreneur's Spirit, Women's Edition," which was recognized as a leading business book by Small Business Trends.

DeDe's inspirational story is featured in "Choices and Illusions: How Did I Get Where I Am and How Do I Get Where I Want to Be?" by New York Times bestselling author, Eldon Taylor.

She is the co-creator, along with Dr. Avery Carpenter, of the audio program, "Pretty Poisons and Tasty Toxins," which teaches listeners about the foods that contribute to health, energy and well-being so you can feel amazing and do more in life.

Before becoming a speaker and entrepreneur, DeDe spent 25 years as a corporate sales executive, selling millions of dollars worth of products. The companies she worked for include Toyota Material Handling, Waste Management, State National Insurance Company and Auto Financial Group. DeDe was one of the first successful women entering into "a man's world" of heavy equipment and forklift sales in Oklahoma and California.

As a singer, DeDe released her debut CD in 2009, titled "I Believe." Her latest original song, "Beautiful Addictions" is featured on a compilation CD for the nationwide anti-bullying campaign, "The AnonymoUS Initiative," which brings awareness to the ways we bully ourselves, and sheds light on the devastation brought about by adult and adolescent bullying.

DeDe has performed live in front over 100,000 people and for three million TV viewers. She has sung the National Anthem for professional organizations such as the NBA's Oklahoma Thunder, and MLB's Houston Astros, as well as her beloved New York Yankees.

She is currently in production on her autobiographical one-woman show, "If I Stop Then Who Am I," written by award-winning New York composer and lyricist, Daniel Mate.

DeDe's uncle was Major League Baseball player, Bobby Murcer: a 5-time all star and Gold Glove award winner, who played 18 years for the New York Yankees, San Francisco Giants and Chicago Cubs. After retiring from baseball in 1983, Bobby went on to become an award-winning broadcaster, spending 24 years with the New York Yankees in the broadcast booth, alongside announcing greats like Phil Rizzuto, Tony Kubek and John Sterling. In 2008, Bobby passed away after a 19 month battle with brain cancer.

DeDe and the entire Murcer family support the Oklahoma Brain Tumor Foundation and the great work they do for families suffering from cancer.

DeDe is married to stock trader Rick Moffett. They live in beautiful Evergreen, Colorado, just outside of Denver, with their three furry kiddos: Sheba, a 17 year-old blind cat; Sam the General, a Yellow Lab-Chesapeake Bay Retriever (who can't retrieve a darn thing), and Asta the Runway Model, a West German Showline GSD. 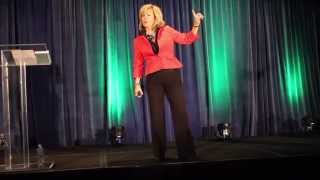 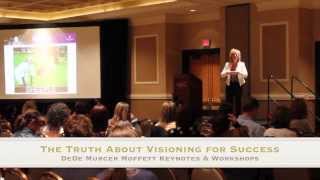 Ignite Big League Courage Do Something Amazing
Relevant and timely information customized for your group and theme, combined with lot's of entertainment for maximum engagement and retainment. The message: If you want to do something big... be it open a new sales territory, start a new division, or heighten your own level of personal performance... you'll likely have to do things you haven't done before.

Snap Out of It!

Snap Out of It!
How to Develop Creativity, Innovation and Passion In Any Job
Are you losing market share and wasting good talent by not fostering creativity within your organization?

In a 2012 Adobe Study, 75% of workers say they are under pressure to be more productive on the job instead of creative. There is little time to explore unchartered and unfamiliar territory, the very thing that is required to discover new and exciting opportunities, ideas, products and services.

In order to be a leading edge company in the overcrowded marketplace, you must understand the importance of and learn how to foster creativity within your organization.

In this fun and informative presentation learn how to unleash creativity that sparks innovation so that employees become passionate as they move the company forward and increase the bottom line.

I Got Tired Of Being Someone Else

I Got Tired Of Being Someone Else
How Authenticity Sells and Propels Success
People buy personalities more than they buy products and services. Consumers today are far too smart and aware of marketing gimmicks and propaganda due to being bombarded with slick sales ads from radio, news and the Internet. If you want to engage clients and get them to pay attention to your message, products and services then cut the hype and connect honestly.

In this competitive, busy and distracted world people are yearning for real authentic connections. Everyone is talking but who's listening? Are you taking the time to build trust based on honest communication and feedback? Make that connection and you will unlock the secret to success, sail past your competitors and watch your sells skyrocket. Authenticity in business is the new currency that propels success forward faster.

In this high energy and content rich presentation, audiences are engaged from start to finish. They will walk away with real core tools they can implement immediately to start authentically connecting with clients, co-workers and colleagues while improving their careers, personal lives and the bottom line.

Living a Big Life Takes Big Balls
How to Step Up and Move Forward Now
Career experts point out that beliefs really do influence outcomes. Unless you first believe you can and will find the job or career you want, you'll end up defeating yourself. The second obstacle to success is knowing what you want more than what you don't want. People are afraid to declare what they want because they're afraid they might not get it. Time doesn't stand still and business opportunities are lost to someone else while you're deciding if you're good enough. Grow a pair and take a leap!

In this hilarious and high-energy presentation, DeDe uses parodies and audience participation to open up the minds and hearts of attendees while delivering a no nonsense "ballsy" approach to living a more successful career and life.

She helps participants question the validity of their limitations and laugh at the absurdity of unfounded fears while delivering techniques to help them step up and speak up in their careers and personal lives.

On How to Help You Wake up, Stand up and Snap Out of It! Short, thought provoking and humorous essays to help awaken you from the deep trance of the herd mentality. What you've always wanted to say but didn't have the guts. DeDe says...

Read More
Wisdom Wedgies and Life's Little Zingers:
On How to Help You Wake up, Stand up and Snap Out of It!
Short, thought provoking and humorous essays to help awaken you from the deep trance of the herd mentality.

What you've always wanted to say but didn't have the guts.

DeDe says it for you, so sit back, have a laugh and step outside your comfort zone!