Greg Roth is a keynote speaker who teaches you to take risks. He delivers story-rich talks about crazy ideas, creative enthusiasm, and the culture of experiments we can design to improve our lives and work. He studies "challenges" as a way to change behavior, build skills, and achieve big breakthroughs and has shared over 300 in his weekly newsletter.

How did he get here? His career has been one long experiment.

Read More
Greg Roth Profile
Greg Roth is a keynote speaker who teaches you to take risks. He delivers story-rich talks about crazy ideas, creative enthusiasm, and the culture of experiments we can design to improve our lives and work. He studies "challenges" as a way to change behavior, build skills, and achieve big breakthroughs and has shared over 300 in his weekly newsletter.

How did he get here? His career has been one long experiment.

He started as a journalist, helping Lancaster Newspapers Inc break a story about NCAA violations in a collegiate athletics department. He then worked in sports marketing for a PGA professional, ran a trade magazine and oversaw communications teams at national membership associations, co-led a national workplace initiative funded by the Alfred P. Sloan Foundation, and wrote a floor speech for his boss in the U.S. House of Representatives that went viral, getting over a million hits in 72 hours.

As classic middle child with tons of curiosity, he's been a lifelong polymath: At age 9, he designed and built a miniature golf course in the backyard. His parents were like "seriously?". In high school, he won a scholarship to Berkeley Music Academy at a jazz band competition. As a performing artist, he's released three independent rock albums, produced and hosted his own variety show, done standup and improv comedy, and won a best acting award at an independent film festival.

In fact, he's taken the Renaissance Man concept and applied it to his career: Greg has held over 100 jobs, big and small. Some of the more notable ones: journalist, campaign director, magazine publisher, videographer for a PGA professional, show producer, performer, sketch artist, rickshaw driver, tour guide, garbage man, rickshaw driver, crayon maker, and mascot. Because of this, his talks are peppered with analogies from all walks of life, translating "creative work" to any field.

He has been featured on/in CNN, Washington Post, Voice of America, NPR, RT, and AssociationsNow, and has worked with such brands as Pew Charitable Trusts, Children's National Medical Center, Coldwell Banker, the National Apartment Association, and is a faculty member at the U.S. Chamber Foundation's Institute for Organization Management. 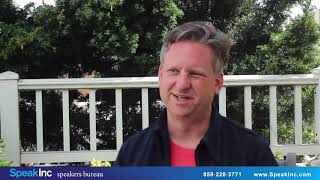 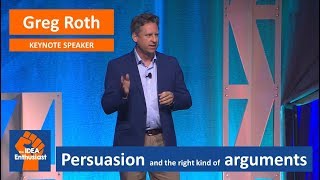 Embracing the Challenge Mindset
How to take risks, forge a new path, and be more creative
Dry January. The Whole 30. The Year of Yes. The Happiness Project. NaNoWriMo. Inktober. 100 Rejections. Digital detoxes, hackathons, social experiments, and beta testing. Have you noticed that no matter what you want to do, there's a challenge out there to help get you started? What if you could apply the common principles of all these challenges to achieve your dreams in your life and your work?

In this fascinating talk, Greg Roth weaves together a rich tapestry of stories and wisdom from individuals, teams, and organizations who were willing to experiment and push themselves, little by little. You'll discover the art and science behind seemingly small challenges that lead to big breakthroughs, why challenges are good for us beyond goal-setting, and how a "challenge mindset" can transform your thinking, your outlook, your approach, your effort, and ultimately your identity.

The Idea-Driven Organization
A gameplan to create, day-in and day-out
We say we want a "culture of innovation", but what does that mean? And what does that look like every single day? The truth is, culture is made up of small moments over time – we are what we repeatedly do. And over and over, we see successful teams show a willingness to experiment and a bias for action.

Inspired by the increasingly-popular "design sprint" methodology invented at Google Ventures to kickstart innovation, this session teaches you how to build your organization's creative capabilities through 5 essential skills. You learn how to:
• Choose discovery over expertise
• Welcome divergent thinking and imagination as idea-drivers
• Encourage healthy forms of debate
• Empower teams to build out incomplete ideas for test
• Demonstrate the promise of new ideas to skeptics and the risk-adverse

NOTE: Also available as a companion ½-day or full-day workshop, "The 5Ds" or "The Weekly Innovator".